Jane Goodall's celebrity came early, starting in 1963 with the first National Geographic magazine article featuring a young Englishwoman living among the apes. That was followed by more articles, then television features and lecture tours soon reaching large and rapt audiences across the United States. Her 1971 popular book, In the Shadow of Man, became an international best-seller and was translated into close to fifty languages. Since then, she has been the subject of a seemingly endless series of documentaries, books, articles, reviews, and interviews—sufficient altogether that, with the possible exception of Marie Curie, Jane Goodall may be the best-known woman scientist in history.

Celebrity is not the same as accomplishment, of course, but her accomplishments are clear enough. Her research site at Tanzania's Gombe Stream National Park, on the shore of Lake Tanganyika, is still organizing studies on the behavior of chimpanzees, as well as several other species, and it is the longest-running scientific field station in history. Her scholarly tome summarizing the first twenty-five years of research at Gombe, The Chimpanzees of Gombe (1986), remains a primary resource for anyone wishing to understand chimpanzees or to know what happened in primatology during the twentieth century. She has been honored through the world for her achievements as a scientist and for her later work in conservation and peace.

Part of the "Jane Effect" celebrated by this book has to do with that achievement and the impact it has had on the professional careers of individual scientists and others interested in animal behavior and animal welfare. Much less known or obvious is the personal side of Jane Goodall. She is an unusually warm and generous person who has always opened her home to visitors, her camp to colleagues and students, her attention to fellow travelers, and her heart to animals and the plight of animals in our contemporary world. The effect of this warmth and generosity is yet unmeasured and untold, and my friend Marc Bekoff and I (who originally conceived of this book as a simple way to mark our mutual friend's 80th birthday on April 3th, 2014) hope it will begin to measure and identify that effect. 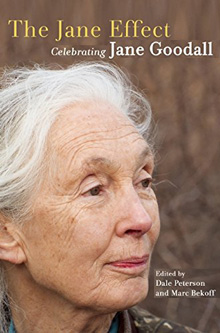