I wanted to write a frothy, fun book that included “easy” travel—no more strange cities and dark woods in Africa—and would give my two children, Britt and Bayne, a glimpse of what I did for a living. Britt was in her early teens. Bayne was just approaching his teens. So it was a good time to do it; and to make sure they were engaged in the project, I wrote an official contract and officially hired them, for a certain minimal daily fee, to be my research assistants. Thus equipped, we set out on a four-month (a month a summer for four years), 20,000-mile road trip to find the country roads and see the small towns of America.

The organizing principle of the trip was the Storyville one. We bought a detailed road map—AAA Road Atlas—and drove only to towns or small cities with strange names. Then we would speak to people until we found someone who could tell us where the name came from. We took notes and photos, and tape-recorded interviews—and my research assistants were continuously asked for their own thoughts, impressions, and descriptions. We quickly discovered that the last person in a town to ask where the strange name came from was the town historian. The second to last: the town librarian. They can tell you, of course, but they will give the true and official and boring version. What we wanted was the real version, with all its color and confusion and variation. So better to ask the waitress or car salesman or the little old lady down the road tending her garden or the town drunk. We also soon discovered that people would often not want me to take their photographs, but they would never, ever, ever refuse a soft-spoken eleven-year-old boy with a small camera in his hands.

We started in Start, Louisiana, passed through Uncertain, Texas on the way to Noodle, Texas, then up to Bug Scuffle, Arkansas; over to Hot Coffee, Mississippi; Between, Alabama; Pinch, West Virginia; Accident, Maryland; Intercourse, Pennsylvania; Climax, New York… as far north as Sunshine and Sunset, Maine; west out to Monkeys Eyebrow, Kentucky; west again to Nothing, Arizona… west some more to Likely, California… and north all the way to Cold Foot and Deadhorse, Alaska. But here is what I find truly amazing, thinking back on it: Over four months and 20,000 miles, we never had a single bitter fight.

"A funny, poignant book that will forever change how you read a map."—Atlanta Journal and Constitution

"Peterson has produced a unique work that is reminiscent of Steinbeck’s Travels with Charley and Charles Keralt’s America… [a] witty, totally charming book."—Library Journal (starred review)

"For armchair travelers who like to read American maps, savor their place names, and wonder what’s out there… A droll and quirky account."—USA Today

"Peterson has an appreciation for places off the beaten path and an eye for the minutiae of everyday life… A warm father-child travelogue."—Booklist

"A one-of-a-kind journey with lots of insight and touches of hilarity."—The Reader's Edge 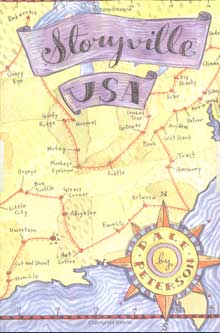