Jane Goodall: The Woman Who Redefined Man began ten years before publication, near the end of 1996, when I was driving my friend Jane Goodall to the airport from a lecture she had given at MIT. The National Geographic had recently published a biographical sketch of her: the woman who had come to fame in the early 1960s with the story of her life among the wild chimpanzees and her startling discovery that chimps make and use tools. But I thought the Geographic piece was superficial, and during our ride to the airport, I said as much to Jane—and then blurted out, “You know, somebody should do a real biography of you.

So the project began. It took ten years in part because of the wealth of materials I had. Jane was raised by a mother who seemed never to throw anything away—particularly those letters from her precocious daughter. I was very fortunate to get to know her mother and sister, a little, and to interview her father, her Aunt Olwen (Olly), her nanny, her first husband, her son, her best friend from childhood, and so many others who have, at one time or another, known this brilliant and charismatic woman. The biography was named a Notable Book of the Year by The New York Times, and a Best Book of the Year by the Boston Globe and the Denver Post. It’s been translated into Korean.

"Dale Peterson has given us a beautiful book—a flowing, detailed biography of Jane Goodall that clearly explains her insights and why they created a watershed in the scientific understanding of animals… Peterson has achieved the tour de force of conveying Goodall's charisma while explaining the significance of her science—and indeed, why neither would exist without the other."—American Scientist

"Peterson vividly and significantly enriches our understanding of Goodall as a scientist, spiritual thinker, and humanist."—Booklist (starred review)

"After years of close study and friendship, the result is non-fiction that reads like a historical novel."—Boston

"A vigorous biography that captures its subject's many complexities."—Boston Globe

"A loving depiction of a remarkable woman who charmed the world as much as it captivated her."— Kirkus (starred review)

"Peterson [has developed] an empathy for his subject uncommon in scientific biographies… This book captures the spirit of a remarkable woman in science."—Library Journal (starred review)

"Dale Peterson has produced the long-awaited, definitive biography of (arguably) the world's leading figure in primatology… Peterson's volume is the one for which Goodall's devotees have been waiting, and it will deservedly enjoy much success."—Nature

"Peterson is an expert guide to the territory."—Natural History

"[This book] grows, detail by detail, into an absorbing portrait … provides a remarkable account of what a person can accomplish through courage and self-sacrifice."—New York Times

"A primate's delight."—O: The Oprah Magazine

"[Peterson] offers a perceptive and intimate portrait without adding a whiff of fawning hagiography."—USA Today

"Humanists and animal lovers will appreciate [this] generous tribute."—Vogue 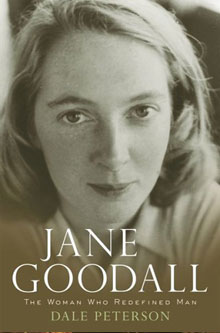 Jane Goodall: The Woman Who Redefined Man by Dale Peterson