Chimpanzee Travels: On and Off the Road in Africa

This book is based on three trips I made looking for chimpanzees in various parts of East, West, and Central Africa. I was very lucky to be invited to a number of research sites and chimpanzee sanctuaries as well as (towards the end of the book) a newly created national park in Congo-Brazzaville where the chimpanzees had apparently never before seen humans—and so I had my first, and I hope last, experience of knowing what it feels like to be an alien just arrived from another planet. It’s pretty scary.

It has been translated into Dutch, and both the Dutch and English versions were republished in later editions.

"Peterson brings a wealth of good humor, a snappy irony, and a laid-back style to what were surely travels with a hard edge of difficulty. It’s easy to admire the man and easier still to admire this droll, shrewd piece of travel writing."—Kirkus Reviews

"Delightful… a book in which humor arm-wrestles with the pathos of paradise lost in modern Africa."—Philadelphia Enquirer

"Peterson cuts a broad swath through east, west, and central Africa… And if you come along, you will be sure to meet some wild characters—not all of them chimps—have some chuckles, learn about animals, and reflect on the continent’s troubles."—Boston Globe 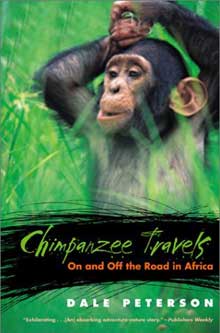 Chimpanzee Travels: On and Off the Road in Africa by Dale Peterson